In a rare six game series in New York, the Cardinals had earned a split in the opening day double header.   It could have gone better, but it was certainly something they could build on.  If they could.

The series was now tied at 1 game apiece.  All eyes would turn to game three to see which team would take control in the series.   It was the job of Sid Fernandez and Bob Forsch to prevent the other team from doing just that.

This game turned out to be a thrilling pitchers duel as both starters went deep and kept the other team off balance.  Fernandez, a left-hander, was always deceptive, and he was doubly so on this night.  Forsch, the Cardinals right-handed veteran, was no longer the hard throwing pitcher of the last decade, but had become somewhat of a crafty hurler, using a good curveball to make hitters pound the ball into the ground, instead of over the outfield wall.

The Cardinals would get a quick run off Fernandez in the top of the first inning.   With one out, Ozzie Smith would single and then score when Tommy Herr pulled the ball down the left field line.  The heart of the order would fail to extend the inning, so when the Mets came up to bat, they only trailed 1-0.

The Cardinals next big chance to break the game open came in the seventh inning.  With one out, Tom Lawless would single, and just as it played out in the first inning, Steve Lake would rip the ball down the left field line for a double.  While Lawless had good speed, it was not enough for him to score, so the Cardinals had runners at second and third with just one out.  This felt like a big inning that would decide not only the game, but perhaps the entire series.

Gambling a bit, Whitey Herzog chose to stick with Forsch instead of using a pinch hitter.  In hindsight, that may have been a bad decision, but it is hard to fault Herzog’s thinking.  Forsch had been cruising, not allowing a run for six innings.   He was also a former outfielder and could handle the bat as well as a lot of position players.  Unfortunately, it would not work out for Herzog when Forsch struck out and Vince Coleman grounded out to end the inning, and an important rally.

Bob Forsch would retire the first two Mets hitters in the home half of the seventh inning, but a warning track fly ball off the bat of Howard Johnson sent a warning signal over to the Cardinals bench.   Rafael Santana would double, as he did late in the first game the day before.  This one would turn out differently when he scored the tying run on a Lee Mazilli pinch hit single.   Even though the game was now tied, the Cardinals hitters had to be happy that Sid Fernandez was now out of the game.

Doug Sisk, who had given up a run in the second game of the double header the day before, took over for Fernandez.  He walked the first two batters which got Davey Johnson out of the dugout in a hurry.  Into the game came Jesse Orosco, and nearly as quickly, the Cardinals ended their scoring chance.

Pat Perry, one of the sudden heroes of Herzog’s bullpen took over for Forsch in the ninth inning and retired the Mets in order.

After a double header the day before, this game would go into extra innings. Something unexpected always happened with the Mets and Cardinals played.

When Jesse Orosco walked Ozzie Smith to lead off the tenth inning, it felt like this might be a pivotal moment in the game.  That feeling quickly went away when Smith was forced at second base on a Tommy Herr grounder and a harmless fly out by Andy van Slyke.   But these plucky Redbirds never quit.

A walk to Terry Pendleton and infield single by Tito Landrum would load the bases.   John Morris worked the count full, and with the runners going on the pay-off pitch, Morris hit a single to right field that would clear the bases.   The Cardinals had just broken the game open, and now led 4-1.  Todd Worrell popped up in the bullpen and prepared to come in to save the game for Pat Perry.

He did, bit it wasn’t pretty.   Quick ugly in fact.  Back to back doubles to start the bottom of the tenth inning got what Mets fans were left, back on their feet.   With the heart of the Mets batting order coming up, Worrell had some serious work to do.   Len Dykstra would ground out to Ozzie Smith.  The Mets played that one too aggressively, and it would cost them a run when the lead runner was thrown out at third on the play.   As if scripted, Wally Backman would follow that with a single that would have easily scored Wilson, had he stayed at second base.  With the tying runs now on base, Worrell got Keith Hernandez and Gary Carter to fly out to end the game.

Pat Perry gets the win, and Worrell notched another shaky save.

How could you top an extra-inning thriller ?  How about a Doc Gooden and Greg Mathews pitching duel ?

Dwight Gooden was one of the most exciting pitchers to come around since Tom Seaver.  He exploded onto the National League scene with an impressive rookie season in 1984, earning him the Rookie of the Year honors.  His sophomore season in 1985 should be filed right next to Bob Gibson’s 1968 as one of the best ever thrown.  It would earn him his only Cy Young Award.

The Cardinals had somebody pretty special in their lineup too.  Greg Mathews had also burst onto the scene with a meteoric rise through the Cardinals minor league system.  The hard throwing left-hander would be drafted by the Cardinals in 1984.  He would play in rookie ball, short season A and finish the year with the long season A ball affiliate in Savannah.   He would start 1985 in A ball, this time in St. Petersburg.   After going 13-1 with a 1.11 ERA, he would be promoted all the way to Louisville(AAA) where he would post another 6 wins against 4 losses and an impressive 2.92 ERA. 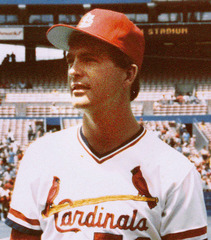 Mathews would start the 1986 season in Louisville, but after just seven starts, that looked a lot like his strong finish the previous year, he would be called up to pitch in the majors.   He would bring an impressive 8-3 record with an ERA of 3.38 into this game against Gooden.

Gooden was not as sharp as we’d seen him previously, but he pitched well enough to keep the Cardinals off the scoreboard until the seventh inning.  Gooden would hit Clint Hurdle to start the inning, and Whitey Herzog would send in Vince Coleman to run for Hurdle.   Coleman immediately stole second base and then scored on a rare clutch hit from catcher, Mike LaValliere.  Greg Mathews, who was matching Gooden pitch for pitch, sacrificed LaValliere to third base with a bunt.   Ozzie Smith would hit a fly ball to center, but not deep enough to score LaValliere.   Was a 1-0 lead going to be enough to win this game ?   The way Mathews was pitching, it just might.

Roger McDowell would take over for Gooden in the ninth and retire the Cardinals in order.

Greg Mathews took the mound in the bottom of the ninth with a chance to earn a 1-0 shutout.   After a Kevin Mitchell fly out, Lee Mazilli got all of the Mets fans back on their feet with a game tying home run.   Still having to face Darryl Strawberry and Ray Knight, Herzog stuck with his rookie left-hander, and Mathews retired both batters.

Both McDowell and Mathews would retire the side in order in the tenth inning.

The Cardinals would get to McDowell in the eleventh.   With one out, Terry Pendleton would single.   He would then steal second base, taking advantage of Mets catcher, Ed Hearn.  If Gary Carter were behind the plate, Pendleton might not have been that aggressive.   It turned out to be a moot point when John Morris hit a ball into the right field corner for a triple.  He would score an insurance run when Vince Coleman hit a ground ball to the infield.   Instead of taking the out at first, the Mets tried to throw out Morris at the plate.  Unsuccessfully.   The Cardinals now had a 3-1 lead.

Pat Perry would again come in and try to shut the door, but would allow the first two batters to reach.  Herzog again goes to Worrell, who had been shaky in his previous appearances at Shea Stadium.   This time, Worrell was brilliant as he got three quick outs to earn the save.

Greg Mathews would earn the ninth win of his rookie season with a ten inning effort, allowing just one run on the Lee Mazilli home run.

Momentum was clearly on the side of the Cardinals.

This entry was posted in Where Were You on .... Bookmark the permalink.